Tuesday 17 August 2021
After the feelgood Olympic Games in Tokyo, Team GB’s stars returned to a homecoming like no other at Queen Elizabeth Olympic Park on Saturday.
The scene of that glorious summer in 2012 was the perfect setting for our Olympians to be celebrated by fans, friends and family.
I Am Team GB’s Festival of Sport lasted all weekend with events happening across the country to pay tribute to those who brought home 65 medals in Tokyo.
More than 5,000 people took part in a ‘lap of honour’ around London Stadium with many getting a chance to run alongside athletes such as relay champion swimmer James Guy and weightlifting silver medalist Emily Campbell.
It was a chance for fans to meet their heroes but also for an important statement to be made about getting active. While those in attendance were encouraged to run the 1km route round the stadium, Bikeworks, the all ability cycling club which is based on the Park, offered free taster sessions.
Jim Blakemore, chief executive of Bikeworks, said: ‘What an inspiration it is to have our Team GB athletes back on the Park.
‘It’s also really encouraging to see so many people, of all ages and abilities, show an interest in what we have got to offer. The benefits of cycling for your health and the environment are there for all to see.’
'Guy, who won two golds and one silver in the pool in Tokyo, put it well when he said the homecoming event was as much for the fans as it was for the athletes.
He said: It’s about inspiring the next generation. I know that’s going be said quite a lot but it generally is. That’s why we’re here today making people feel that they are part of Team GB, which they are. One country or one team, we’re all in it together. I’m sure the kids were screaming at the TV thinking “I want that when I get older.”'
Divers Matty Lee and Jack Laugher were pleased to be back at the Park which they call their second home. Lee, who won gold with Tom Daley in the men’s 10m synchronised platform, and Laugher, who won bronze in the men’s 3m springboard, both train at the London Aquatics Centre with Team GB.
They are used to being very close to those who cheer them on as the diving area where they train at the LAC is only a few yards away from members of the general public who use the Olympic pool to swim in every day.
Lee said: ‘One of the best legacies of London 2012 is the world class facilities we have here. ‘The London Aquatics Centre is our training home and has played a major part in our success. What actually makes it even more special, and we get this each time we train here, is how close you are to people who just want to come for a swim.
‘If you want to talk about Olympic legacy then you don’t need to look much further away than where we are now and all that is happening.’ 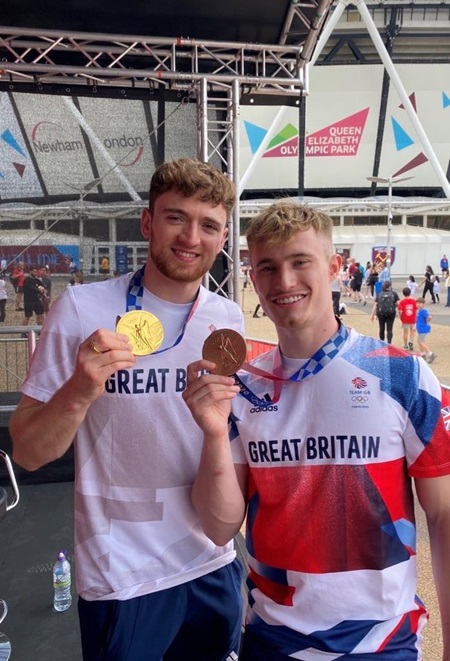 Matty Lee (left) and Jack Laugher show off their gold and bronze medals at Saturday’s I Am Team GB event.