The award is the international quality mark for parks and green spaces.

After 18 months that have seen our parks and green spaces play a vital role for people through lockdowns as a place to relax, exercise and meet friends and family safely, the news that Queen Elizabeth Olympic Park has achieved the Green Flag Award is testament to the hard work and dedication of the team that make the green space a great space that everyone can enjoy.

“We’re incredibly proud that Queen Elizabeth Olympic Park has once again been awarded the prestigious Green Flag Award. The Park has proved itself as a lifeline for many east Londoners, with the beautiful parklands providing safe, open space for everyone in the local area. We are  also honoured to host the London Blossom Garden – a living memorial to commemorate the city's shared experience of the Coronavirus pandemic.

“Retaining the award for the eighth consecutive year is an honour, and is a testament to the hard working staff and volunteers who have kept the Park open during such difficult times, so thank you to everyone who played a part in this.”

“To meet the requirements demanded by the scheme is testament to the hard work of the staff and volunteers who do so much to ensure that [name of site] has high standards of horticulture, safety and environmental management and is a place that supports people to live healthy lives.”

The Green Flag Award scheme, managed by environmental charity Keep Britain Tidy under licence from the Department for Levelling Up, Housing and Communities, recognises and rewards well-managed parks and green spaces, setting the benchmark standard for the management of green spaces across the United Kingdom and around the world.

In celebration of this year’s announcement, Green Flag Award is asking buildings and monuments around the UK to #GoGreenForParks today to show appreciation for the spaces that mean so much to people.

This event is a joint initiative between the Royal Parks Guild and the London Legacy Development Corporation in partnership with The Tree Council and its Close the Gap* national hedgerow planting and restoration programme.

Promoting biodiversity and conservation in urban spaces has been a key part of the transformation of Queen Elizabeth Olympic Park and its surrounding neighbourhoods into a smart, sustainable district. Since the Games the Park has become home to wide array of wildlife, with green and blue infrastructure providing links for nature through the park and into adjacent areas.  Bat conservation has been a focus for the Park, with 150 bat boxes providing habitat for the UK’s smallest bat – common pipistrelle – and also the UK’s largest bat – the noctule.

The London Legacy Development Corporation has been working closely with UK and international partners to develop Queen Elizabeth Olympic Park as The Smart Park, using leading edge technology to promote its sustainability objectives.  This includes provision of free Wi-Fi for visitors across all 560 acres of the Park, making it the largest public Wi-Fi network of its kind in the world, implementing energy efficiency innovations in Park venues, creating new approaches to sensing and communicating data, and providing urban test bed space for the development of new technology – such as connected and autonomous vehicles.

About the Green Flag Award Scheme

The Green Flag Award Scheme (greenflagaward.org) is run by the environmental charity Keep Britain Tidy, under licence from the Department for Levelling Up, Housing and Communities, in partnership with Keep Scotland Beautiful, Keep Wales Tidy and Keep Northern Ireland Beautiful.

Keep Britain Tidy is a leading environmental charity. We set the standard for the management of parks and beaches, inspire people to be litter-free, to waste less and live more sustainably. We run campaigns and programmes including the Great British Spring Clean, Eco-Schools, Love Parks, Eco-Schools, the Green Flag Award for parks and green spaces and the Blue Flag/ Seaside Awards for beaches. To find out more about Keep Britain Tidy, our campaigns and programmes visit keepbritaintidy.org.

Any green space that is freely accessible to the public is eligible to enter for a Green Flag Award.  Awards are given on an annual basis and winners must apply each year to renew their Green Flag Award status.  A Green Flag Community Award recognises quality sites managed by voluntary and community groups. Green Heritage Site Accreditation is judged on the treatment of the site’s historic features and the standard of conservation. 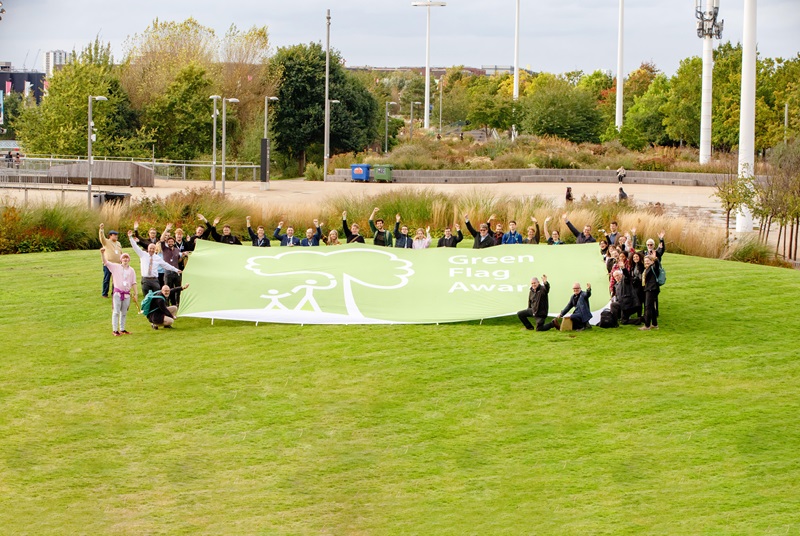