Renowned filmmakers including  Danny Boyle, Stephen Daldry, Wes Anderson, Tim Burton, Bill Condon and David Cronenberg have all used its facilities for feature films, while countless television, commercials and music videos have been filmed on site.

It is popular due to its location, with excellent transport links to central London, and for its facilities, which include nine filming stages from 3,800 sq. ft. to 13,500 sq. ft. and twelve theatre spaces ranging from 280 sq. ft. to 3,945 sq. ft.  Stage 5 has the same floor size as the Royal Albert Hall arena, making it one of the only indoor venues suitable for large scale ballet, theatre and opera rehearsals.

3 Mills Studios also offers production offices, construction and prop stores, make up, costumes and green rooms and a mix of production related tenants such as catering, camera hire and casting. 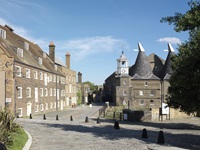 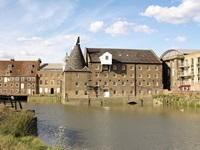 The Park will be home to five new neighbourhoods and 10,000 new homes. The first residents are already moving in to the vibrant new E20 postcode, and the area around the Park is being transformed.

All of your Park questions answered – from how to get here, to how to get around once you are – and our latest information for visitors.