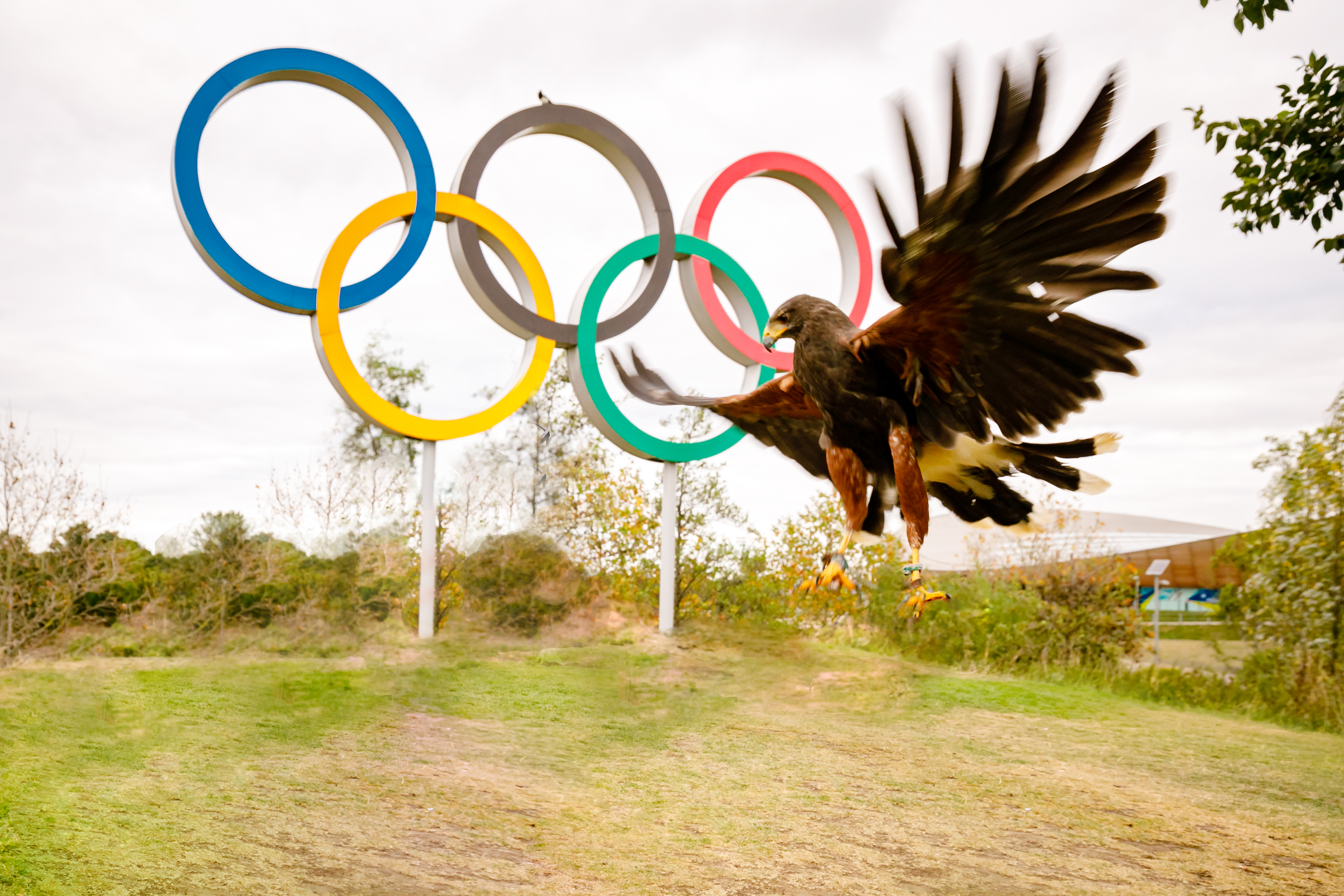 Many famous faces have competed in the iconic venues of Queen Elizabeth Olympic Park; on foot, on wheels and in the water. But not since Her Majesty jumped out a helicopter with James Bond has the home of the London 2012 Games seen a celebrity take to the skies above the famous stadiums – until now. Famous for chasing unwanted pigeons away from Wimbledon during the tennis championships, Rufus the Harris Hawk, is bringing his bird scaring skills to east London.

Described as ‘an English icon’ by the New York Times, and boasting over 10,000 followers on Twitter including celebrities such as Ore Oduba, Laura Tobin and Georgia Toffolo, the world-famous hawk will be patrolling the skies above the Park once a fortnight. Known as hawking, the process of sending Rufus flying around the Park is an environmentally friendly way to manage unwanted birds nesting where they shouldn’t. And with a four-foot wingspan and razor-sharp talons it’s easy to see why other birds, such as pigeons, would be intimidated by him and choose to move on.

Eleven year old Rufus has been working since he was young, most famously at Wimbledon since 2003, but also at other locations such as Westminster Abbey, hospitals and airfields. At the Park, Rufus will be flying freely, learning over time where pest birds like to settle. As birds are very territorial, and a hawk is much larger than a pigeon, Rufus will stop the pest birds nesting, so over time visitors will start to see fewer pigeons and gulls on the Park.

Wayne Davis, Rufus’ handler, said: “We’re thrilled to bring Rufus to such a recognisable location as Queen Elizabeth Olympic Park. We’ve already bought him to the Park so that he can familiarise himself with the area and we hope that visitors will enjoy spotting him more frequently as the months pass.”

Travel just 10 minutes from central London to Stratford and you’ll find yourself surrounded by nature without leaving the city at Queen Elizabeth Olympic Park. Created for the London 2012 Olympic and Paralympic Games, the Green-flag award winning Park is free to enter and home to fun parklands, secluded gardens and tranquil waterways as well as community events and elite sport in world-famous venues.